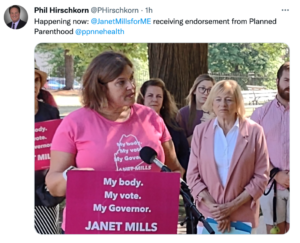 “Janet Mills standing onstage with a group documented as supporting the Defund the Police agenda to accept their endorsement tells you all you need to know about her priorities,” Jason Savage said. “Mainers who are concerned about crime, the worsening opioid epidemic, and the sheer lunacy of “defunding the police” should vote for Paul LePage in November. He’s been endorsed by Maine’s largest police union for a reason.”  (From Maine Republican Party)

Gov. Mills Brags on Her Pandemic Response, but ME CDC Data Demonstrate Her Failure