Absentee Ballots  – You can request your absentee ballot here now.  Absentee Ballot Request
And you can pick up your ballot at your municipal office and vote in person there now.

Rank Choice Voting – The Maine US Congressional District 1 race between Chellie Pingree and Ed Thelander has become a Rank Choice Vote Ballot since a third, independent candidate completed the process to have a spot on the ballot.

This is the first time in York County that we are using RCV for a National General Election.
It came to our attention that even Town Clerks can be confused about which voting pattern(s) are acceptable and which would void your ballot and, unfortunately, they can unintentionally give out the wrong information. We have addressed the situation where we told this occurred and the Clerk was appreciative when informed of the error and directed to the Secretary of State’s Office for confirmation and more information about acceptable RCV ballots.

To avoid any possibility of a vote being misunderstood and to eliminate the possibility for a ballot being tampered with by votes for other candidates being added in the 2nd and 3rd columns, the Maine Republican Party advises that to vote for Ed Thelander it is best to fill in the oval next to his name in all three columns. This slide was provided by the Election Integrity Team as one acceptable way to mark an RCV ballot and the way the Maine GOP suggests we mark our ballots to vote for Ed Thelander. 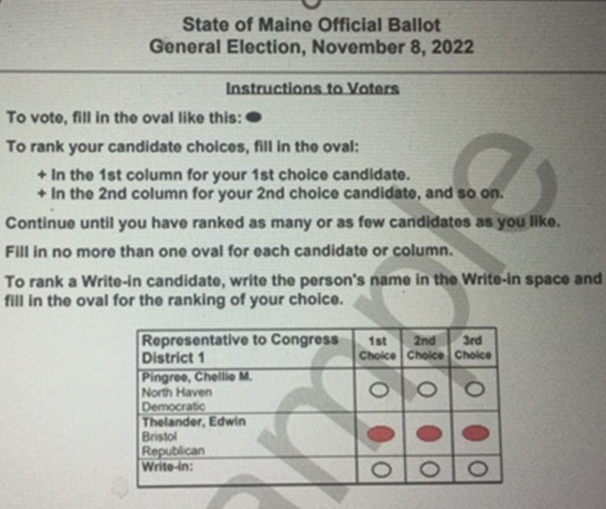 Fun Learning at the September, 2022 Meeting